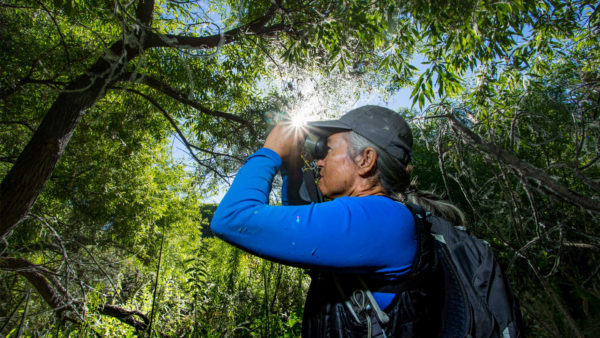 Biologist Mary Whitfield of the Southern Sierra Research Station has spent two decades studying one of North America’s rarest birds: the Southwestern Willow Flycatcher. At her research sites in California’s Kern River Valley, populations have dwindled to just a few pairs. Saving these birds is a challenge because they migrate south to Latin America in the winter and surprisingly, not much is known about their migratory route… or the migratory movements of many North America’s most familiar birds. If we don’t know where migratory birds spend the winter or how they get there, how can we protect them? To help her precious flycatchers, Mary has joined a cutting-edge effort called the Bird Genoscape Project (BGP). Led by Kristen Ruegg and Tom Smith, the BGP gathers data on birds’ genomes from individual feathers, allowing the researchers to connect breeding and wintering populations of the same species and provide critical information to conservationists and managers. Just as importantly, the project brings together researchers from all over the Americas in an effort to protect the birds that tie the Western Hemisphere together.