WSFF librarian Rorie Lin Gotham has been a volunteer at the South Yuba River Citizens League for some time now. We feel lucky to have her help us in Wild & Scenic land by serving as the WSFF Librarian where she helps keep our incredible library of films spanning two decades organized and ready for checkout by our members. We were happy Rorie agreed to answer some questions for us about her involvement with the organization:

1. Can you tell us a little about yourself and how long have you been volunteering for SYRCL? 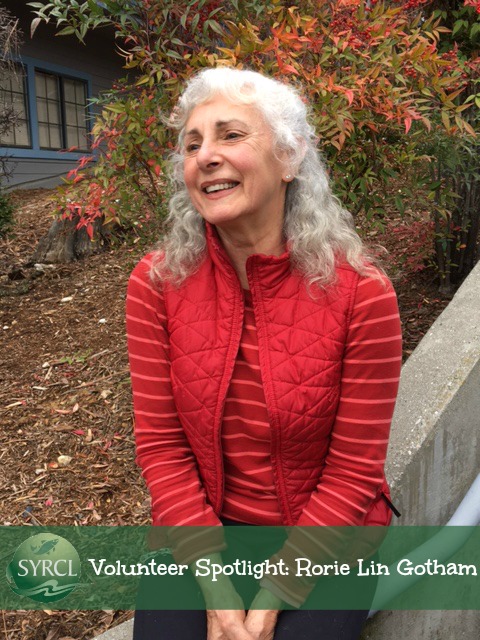 As a life long lover of rivers and wilderness, I have been in the great outdoors for most of my life.  My parents loved to canoe, camped at all sorts of Upstate New York lakes, and enjoyed hiking and playing  in the forests. My first ride in a canoe and then camping was when I was not even 6 months old. Winter time was great fun also, we skied, ice skated, sledded, made snow forts and snow people. So being outside is in my blood and it began very early on. As a young girl I grew up in Elmira, NY and lived on Riverside Avenue next to the Chemung River.  My three brothers, as well as most of the neighborhood kids, played yearly in the river  – so seriously, rivers are in my blood

When visiting California in 1974, I went on my first white water rafting trip on the Stanislaus Camp 9 section (which was drowned and under a reservoir).  After that I just had to relocate to California to enjoy all the adventures and opportunities to be around rivers. I purchased my first raft in 1979 and have been “running” rivers ever since and have probably been on most of California’s rivers up and down the state.  Now I am retired but live on the South Yuba River and if I am not paddling, can enjoy the greatest parts of  river love: the sights, sounds and senses that are aroused by a living riparian system right here in my back yard.

After being a member of Friends of the River and living in the Bay Area, I joined SYRCL when I purchased  a weekend get away in Nevada City back in the early 1980s.  I took an early retirement and came to this area in 1997 and never looked back at city life. I have been a River Monitor for most of the years since its establishment and have helped in the office and at the Film Festivals and just love being a productive part of SYRCL.  After all the South Yuba is my home.

2. What sort of work do you do involving the Wild & Scenic Film Festival library?

As the volunteer who keeps the Film Library organized so members can borrow films from each years Festival.   I  spend several weeks making  copies of the films and start  binders of the same for  each year.  Also involved is updating the two master binders that list the films available by genre and by year. Then weekly, I file films back i the binders returned to SYRCL and call members when films are outstanding.  When films are missing, I made new copies to keep the films available for enjoying.

3.Why do you enjoy volunteering for Wild & Scenic Film Festival?

Being a part of SYRCL is enjoyable, and I get to interact with staff, members and feel I have some kind of purpose by being committed to managing the Film Library

4. Why do you think the library is an important part of the festival?

The Library is a great way to keep members interested in and reminded of the annual Film Festivals. It also is a perfect way to keep people informed and up to date on issues.

5. What is your favorite part about helping WSFF with the library?

6. Do you have any favorite films that you recommend to those thinking about dropping by and renting a film?

Most of the films available are inspiring and worthy of any viewers time and attention.

Now more than ever, it is important for each and every one of us to stay aware and become involved on one level or more of the state of our global and neighborhood environmental issues.