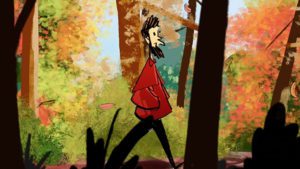 Based on the true event, Henry David Thoreau builds a cabin in Walden, Concord Massachusetts as a social experiment to see what he could learn from living amongst nature and away from society, inspired by the ideologies of Transcendental philosophy. During his two years at Walden Pond he discovers the importance of simplicity, self-reliance, spirituality and societal disobedience. In the film, he wakes up to his final day of discovery in Walden, takes out his notebook of observations and poetic writings. He reads an excerpt, which casts his mind back over the years to relive the memories of his experience at Walden in a moment of transcendence. Thoreau’s book of the same name heavily inspired the need of the films creation as it stresses the importance of our relationship with nature; how much we should be involved with it and whether we can or not with the prominence of technology shifting the environment we live in.