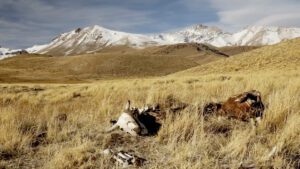 The Patagonia region of Argentina is known for its stunning landscapes and famous wines. But it harbors a dark secret. Home to the world’s fourth largest shale oil reserve and second largest shale gas reserve, the people living here have suffered the impacts of fracking in quasi-total obscurity, ignored by both Argentinian and global media. This is Fracking centers around the theme of climate colonialism, showing how oil companies, while banned from fracking in their home countries in the Global North, are instead fracking the Global South, in areas where environmental laws are more lax and the economic situation more dire. As oil companies reap record profits, local communities including the Mapuche Indigenous People and the fruit producers of Vaca Muerta are suffering the devastating impacts of earthquakes caused by fracking, widespread pollution, encroachment on traditional and agricultural lands, and increased illnesses like leukemia caused by the chemicals found in the drinking water. This is Fracking reveals the true story behind fracking in Patagonia, the one we have not yet been shown.