After two decades of holding festivities in mid-January, the Wild & Scenic Film Festival (WSFF), produced by the South Yuba River Citizens League (SYRCL), is announcing a change in festival dates. In 2023, the festival will be held President’s Day weekend, February 16-20.

“The decision to change the dates of this perennial community favorite was not an easy one, but we’re confident that the move will best ensure the festival’s ability to thrive for many more decades to come,” said Festival Director Lívia Campos de Menezes.

2023 marks the 40th anniversary of the South Yuba River Citizens League (SYRCL). Founded on the premise that “people can save a river”, SYRCL has been uplifting the community by uniting and engaging with local citizens to protect and restore the Yuba River Watershed for decades. With this in mind, Wild & Scenic’ s theme focuses on the importance of approaching challenges as a unified community, and reflects the significance of grassroots movements in protecting nature for future generations.

The festival team is excited to celebrate with its community around the power of film to bring diverse people and ideas together, heal, and give hope. Despite the challenges presented in the last two years, WSFF has continued to thrive in its mission to inspire activism through film. From the flagship festival in February to the hundreds of On Tour events around the country, its informative and inspirational programming and format have helped unite communities near and far. 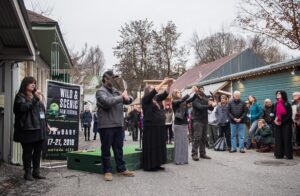 WSFF looks forward to returning to in-person screenings for the 21st annual event held in Nevada City and Grass Valley, CA, from February 16-20, 2023.

The “Early Bird” deadline for submissions is May 29th, with a final deadline of September 2nd. Submit early to take advantage of discounted pricing.

Learn more and submit your film at www.WildAndScenicFilmFestival.org